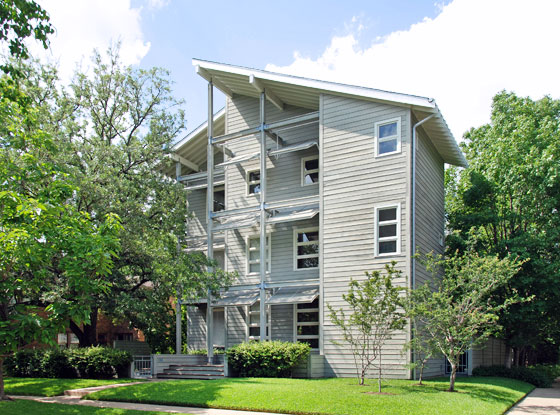 Tour meets in front of the Jung Center, 5200 Montrose Blvd.

When Nathaniel P. Turner platted Turner Addition in 1871, the subdivision was located more than two miles outside of Houston’s city limits. The neighborhood became a desirable residential area in the early 20th century thanks to its proximity to Hermann Park, Rice University and the new Museum of Fine Arts.

Over the years, Turner Addition’s gracious 1920s and 1930s homes and apartments gave way to denser development including some of the city’s early modernist townhomes. Today, the variety of architectural styles represented along the neighborhood’s tree-lined streets gives an overview of Houston’s 20th century urban development exemplified by the work of some of the city’s most talented architects, including J.T. Rather, William Ward Watkin, Howard Barnstone and Carlos Jiménez.

Please note this is an exterior architecture tour only. The tour will not go inside any buildings. There are no public restrooms along the tour route.

Tickets are $10 for the general public ($7 for Preservation Houston membersand students). Children 11 years old and under are admitted free. Tickets may be charged to Visa, MasterCard, American Express or Discover. Tickets go on sale at 1:30 p.m. Sunday, April 13, in front of the Jung Center at 5200 Montrose Boulevard. The last tour group will leave just after 2 p.m. Reservations are not required.

Street parking is free in the neighborhood, but be sure to observe posted parking regulations The tour’s starting point is a short walk from MetroRail‘s Museum District station. Tour participants who walk, bike or use public transportation will receive a $2 discount off the tour price.

Preservation Houston’s Architecture Walks Program is supported in part by a grant from the Susan Vaughan Foundation.